Things are calming down in terms of ground preparation, sowing and planting. the majority of this years crops are in the ground & putting down roots in search of moisture!

Its been an unusual season….again….Winter stretched into mid May. This left us unable to prepare the ground for planting until late May. It also meant that the early crops such as the first salads, that we did manage to get in didn’t do so well, as they thought it was still January.

Pace of work wise, personally I feel like I go from walking pace in February to a gentle jog in March. This turns into a run in early April & becomes a sprint by late April. I’m then running full pelt throughout May & June until the start of July. This year, that run was done in the full heat. I feel like I don’t really get a chance to look at the crops. If I’m not at the field or working with a school group, I’m lying down in the shade or getting in the sea to cool off. So it was a pleasant surprise to walk around this weekend and see how everything is establishing. 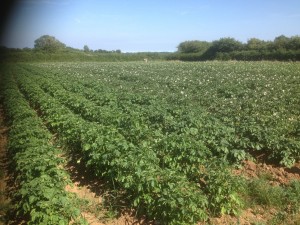 The maincrop potatoes are looking great. Its the first time we have grown a maincrop. We have had almost no rain since they were planted, but I think due to the incredibly wet winter & late ploughing, followed by deep planting & ridging they have retained enough moisture to get well established. We’ll need a good few downpours between now & the end of August though. If not, then it’ll be a winter of small potatoes… 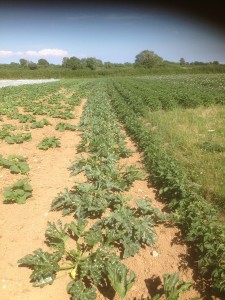 The courgettes are starting to deliver their goods. Surprisingly, considering again the lack of rain. Alongside them we have a bumper crop of winter squash which are also now settling in. They have a rough start, being hit by strong winds for three days following planting & then no rain. Again, assuming we get some moisture this summer we are growing squash for our membership & enough squash to feed 2500 people at an arts event in September with squash soup. 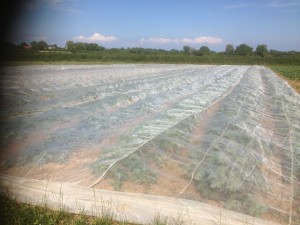 The brassicas are happy under their cover. It seems to have done a good job of keeping in the moisture too. The brassicas are quick to get their roots down so establish easily. Another bonus of the dry weather is the lack of weed seed germination. We haven’t yet had to weed the brassicas & they’re now covering the surface completely. 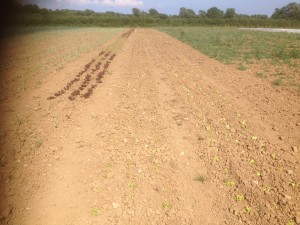 We’ve gotten right on top of salad sowing now. Having filled most spaces at Webbsfield, we’re filling in gaps at Furzehill with a plentiful salad supply. They seem really delicate getting planted into the open dry ground here and sometimes need 2 waterings, but they’re doing great. And not a ******* slug for a mile! 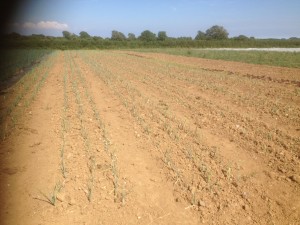 Our 9000 leeks have given me a bit of stress. This year we started them in the tunnel in a seed bed which worked perfectly. I was hoping for some overcast or damp weather to transplant them, but realising it wasn’t going to happen, we moved them to Furzehill before the heat got to them in the tunnel. They looked pretty bedraggled for the first 2 weeks, having been topped & tailed & planted into a desert. We’ve watered them every week which takes about half a day & now they seem pretty pert & lively. So as they mature, hopefully they won’t be too scarred by their early experiences. 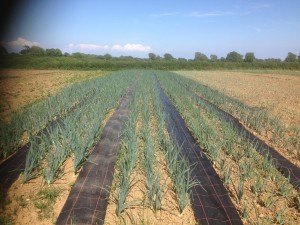 The onions have been pretty hassle free. Both the sets & the seeded modules have established well. Just took one monotonous hand weed as due to our attention falling elsewhere we didn’t get to weed these until the last minute. We should have our most plentiful onion supply yet. 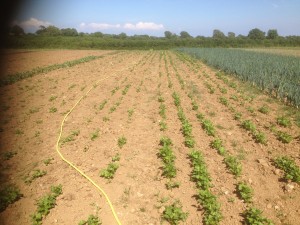 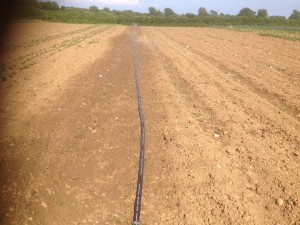 The roots have been a real stress……but having got through this weekend I’ve seen the light at the end of the tunnel & they’re finally all germinating. Thanks largely to this new bit of kit, an irrigation pipe which waters our 80m bed with a fine mist keeping the surface damp, but needing moving every couple of hours.

The parsnips I got in a bit earlier, so they benefitted from a downpour the day after sowing & have germinated fairly well. The carrots went in a bit later & have sat doing nothing for close to a month in the unrelenting heat. But with consistent pipe moving 7 days a week we’ve gotten there! 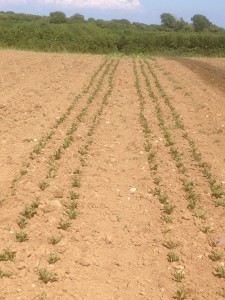 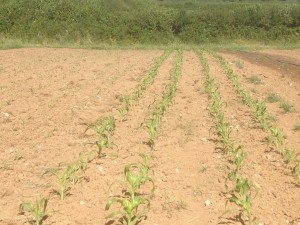 At the far end we are still planting beetroot & sweetcorn. These are doing well. The sweetcorn is happy enough, although I know as everything else it is in need of a downpour.

We’ve also planted a whole load of fennel, celery & celeriac at the other field, but next year they will slot in this end of the rotation at Furzehill.

Francesca is also at Furzehill & her salads are booming with a plentiful water supply, a consistent & attentive gardeners shadow. (Check out the recent blog on Francesca’s salads).

And whats happening at Webbsfield…. 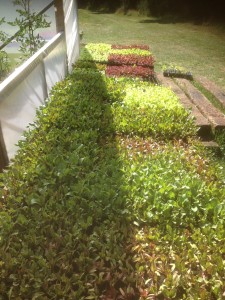 Seedlings for both the fields are started here. Its been great weather for consistent germination & quick growth in trays. The hassle has been getting here to water twice a day at weekends. I love to come early & water but dragging yourself away from the beach on a Sunday evening its less inviting. There’s generally long periods where we don’t have to water seedlings once they’re out doors, but this season has been non stop. I have to give a massive thankyou to Peter & Marjon who came to camp & volunteer with us from London. They took over watering duties for most of 10 days which was a real pleasure not to have to think about it. They also got plenty of beach time in too. 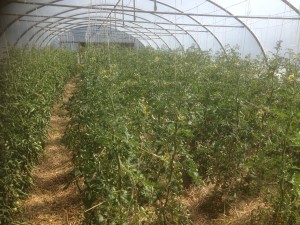 The tomatoes are booming. They were sown earlier this year & we’ve had not stop sun & good irrigation, but they’re still waiting until this week to be ripe. We are expecting a bumper crop. 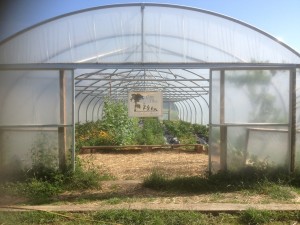 We’ve been keeping the tunnels fully ventilated as we noticed some of the cucumbers tasting bitter. We assume its heat stress. We definitely feel heat stress when we’re side shooting tomatoes in there. 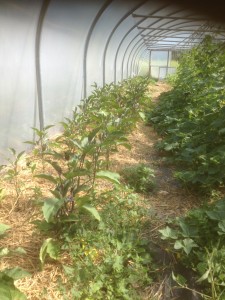 Aubergines are establishing well and starting to form fruit. 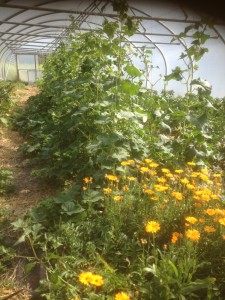 We staggered the cucumber sowing as we had an attack of aphids early on so re-sowed half the crop. We’re already taking about 150 cucumbers a week from half the crop, so be prepared for an onslaught of cucumbers! Hopefully not bitter ones. 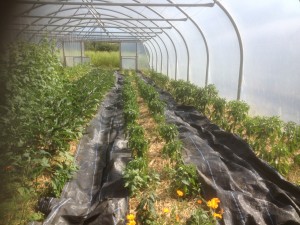 The sweet peppers are also starting to fruit. We’ve had an issue with waterlogging where run off from irrigation soaks the bottom corner of this tunnel. We have replanted & then disconnected the irrigation at the lower end of each row so that these crops will only be watered by run off from other crops. We’ll see how they settle in. 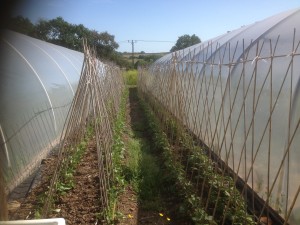 Runner beans coming nicely in the partial shade between 2 tunnels. 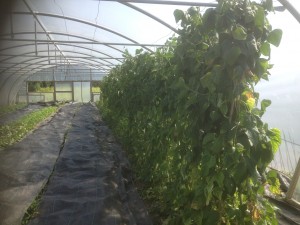 The french beans are usually much happier in the tunnel, but this year not. They aren’t producing much. Just too bloody hot for them in there. 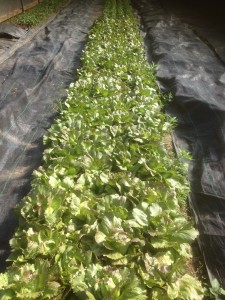 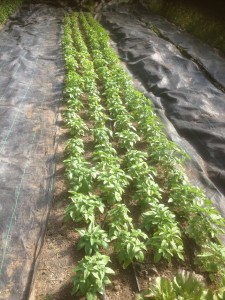 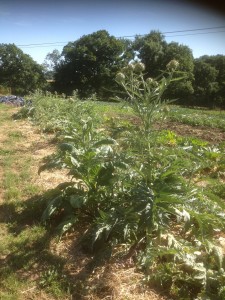 Globe artichoke numbers massively down on last year. As are rhubarb &  strawberries. I’m assuming they missing the moisture. 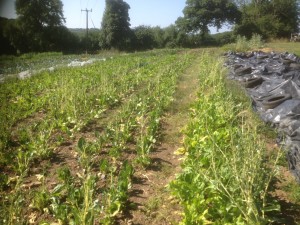 We’ve had 5 weeks pickings from the chard but its feeling the heat & starting to bolt. Its done us well. 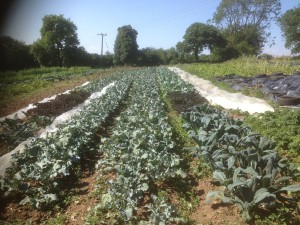 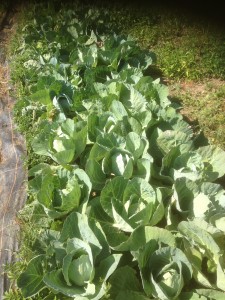 Summer brassica patch of broccoli, kale, cabbage doing ok. Summer cauli decided it was too dry & have not moved since planting. 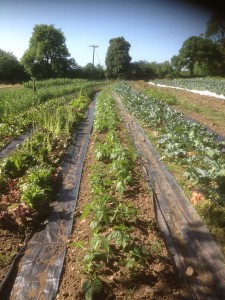 Dwarf french beans took a bit of re-sowing due to early slug losses, but they’re coming & should do well if they can mine enough moisture from Webbsfield. 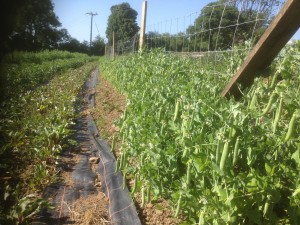 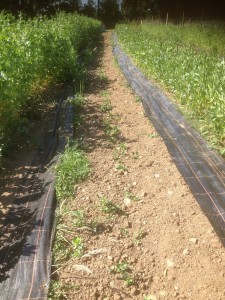 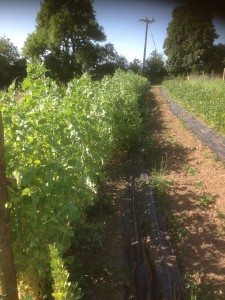 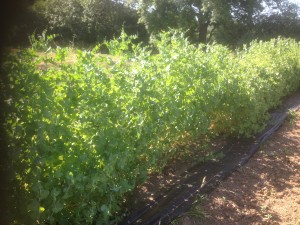 The first sowings of pea & mangetout have done really well, but the successional sowings have failed due to lack of moisture & pigeons. Next year we will pre soak peas & cover the bed whilst they germinate to hold moisture & keep out the birds.

We had some good early harvests of broad beans too. These were from both the over wintered outdoors & the early tunnel crops. The next lot are about to bean up, so more expect them in the coming week or 2. We usually start to loose our broad bean crop to black spot by July due to rain, but not this year….at least so far. This means we may still get the last sowing flowering & producing in August. 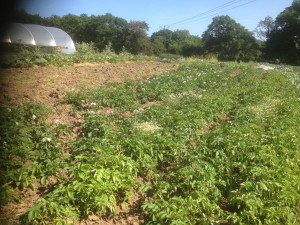 Early spuds at Webbsfield have been pretty rubbish. Planted late as it was so cold & wet, then as they established it totally dried out. The maincrop planted a few weeks later at Furzehill have done better. I assume this is due to the ploughed in turf holding mositure.

So overall it looks to be a plentiful season, assuming we get some rain between now & September. If we don’t, then I expect that crop bulk will be down, but hopefully not drastically.

A massive thanks to Lizzy, Abbi & Isabel who have worked through the unrelenting heat to get all this stuff sown, planted, weeded, harvested…Also a massive thanks to all our volunteers. We couldn’t do this without you.

Lets hope we get a wet summer once the kids finish school! (Or maybe just rain at night….)